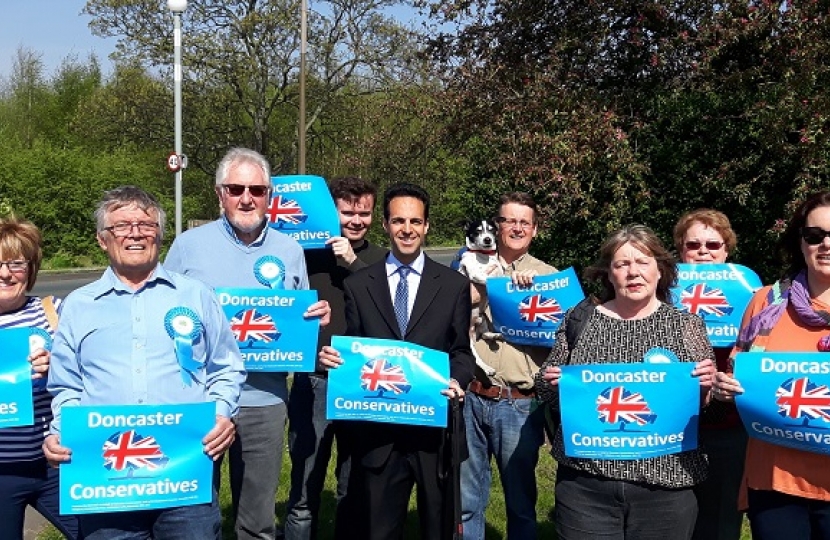 Buoyant by recent defections, the Conservatives fielded candidates in every ward to “bring an end to Labour’s dominance” in Doncaster.

Doncaster Conservatives, the official opposition to Labour on the council, launched their campaign for the 4th of May’s local and mayoral elections.

The event, which took place in Edenthorpe, saw local activists, campaigners and candidates rally behind Karen and Cliff Hampson, who were Lib Dem members but are now standing as Conservative candidates in their local area.

Chairman of Doncaster Conservatives, Councillor Alan Smith, commented: “We are delighted that two of the most hard-working local campaigners are standing as Conservative candidates in the target ward of Edenthorpe and Kirk Sandall.  Having been members of the Lib Dems for years, they have joined our party recently.”

Karen Hampson explained: “Following the EU referendum, it has become clear that the Conservatives are the only credible party that are in touch with the concerns of local people in Edenthorpe and Kirk Sandall.  Cliff and I are thrilled to be contesting this election to challenge Labour’s complacency in our community and to bring about change.

Furthermore, the Conservative candidates in next month’s election include Ross Atkinson and Guy Aston, who stood as candidates for UKIP in the last local election two years ago.

Addressing the event, the mayoral candidate George Jabbour said: “We are very excited about this election and are looking to make gains across Doncaster next month.  Theresa May and the Conservative Party are delivering the outcome of the EU referendum and we, in Doncaster, have voted to Brexit by a significant margin.

“On the other hand, local people have been let down by years of ineffective unreliable Labour council in Doncaster.  In addition, the leadership of the Labour Party across the UK is completely out of sync with the worries of communities such as ours”.